Terry Vandeventer's Living Reptile Museum is a traveling educational program which introduces the audience to the fascinating world of snakes. The program is completely self-contained, including the sound system and advance advertisement materials.

Once again it is time for the Old Courthouse Museum’s  Annual Tinsel & Trees Event!
Open  to the public from December 6th (the night of the Iuka Christmas Parade) until December 20th (IDEA’s Dickens Christmas Festival), this is a great opportunity to support the museum by voting for the most beautiful holiday trees presented by our local businesses. During the closing and ending Open House Events refreshments will be served, and we will be accepting $1.00 votes on the Christmas trees. on all open days in between. 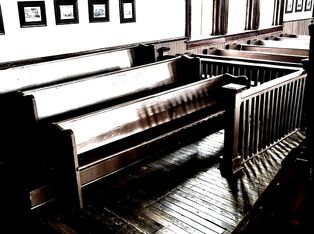 Auditions!
"Witness for the Prosecution"
Young hapless inventor Leonard Vole makes a friend in Emily French, a wealthy older woman.  When Emily is found dead, having left poor Leonard as her principal heir, he is immediately suspected for her murder. His only hope lay in the testimony of his cold-blooded wife Romaine, who chooses not to back up her husband’s alibi but to testify against him. For Vole’s attorney, this is just the beginning of a shocking series of twisting revelations and betrayal.
Auditions:  January 7th, 8th, & 9th, 7pm-9pm at the Old Courthouse Museum.
Production dates:  March 19th and 20th.